The series of earthquakes in Kumamoto (western Japan) in April 2016 triggered a large amount of landslides in the area around Mt. Aso.

"Crisis Mapping" on OpenStreetMap is one of the cases that people in areas away from the earthquake-affected area can contribute to enrich the geographical information shown on online maps.
http://tasks.hotosm.org/?sort_by=priority&direction=asc&search=kumamoto
http://crisismappers.jp/about.html

If with the technique of SfM-MVS (Structure-from-Motion Multi-View Stereo) photogrammetry, one can contribute to visualize geographical information in specific areas with more details, in 3 dimensions.

Here is an example of the landslide occurred near the former Aso Bridge (which was destroyed away) in Minami-Aso region. Among else, this landslide was the largest and most distinct one related to the earthquakes.

Soon after the landslide was triggered by the midnight earthquake, many organizations began to obtain the aerial videos and images to be distributed online.

As a prompt trial, I used a newscast video taken from a manned helicopter. The original video by Fuji News Network is found at: http://headlines.yahoo.co.jp/videonews/fnn?a=20160416-00000923-fnn-soci

Although the resolution, sharpness and locational accuracy were not so high, this prompt result was good enough to help understanding the positional details of the landslide.

landslide aso bridge by yuichi hayakawa on Sketchfab
https://skfb.ly/N6OD
(texture of the 3D model can be changed)

# Below is a previous trial when a gigantic landslide occurred in Afghanistan in 2014; at that time only still images were available.


Then, using aerial images (oblique views) taken from a manned aircraft operated by GSI (Geospatial Authority of Japan), a 3D model and 2D map information were generated.
The images used are also shown at the top of this article.
Because the images had their positional information probably by camera-mounted GPS/GNSS receiver, the georeferencing of the 3D model was readily performed (however some errors may remain). The quality of the 3d model (resolution etc) was actually much better than that from the prompt newscast video.

The 3D model exported to a KML file enables to compare the conditions before and after the earthquake on Google Earth.

Detailed morphological features can be recognized. 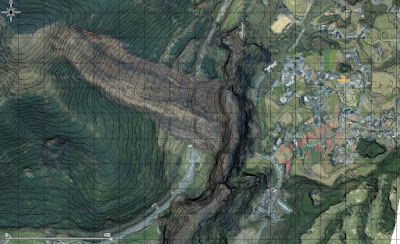 Furthermore, using a video taken by an unmanned aerial vehicle (UAV, namely Drone) provided by GSI, more precise 3D model was generated.
Although the data is a video (not still images), the resolution of the images taken from the lower height is high enough to reconstruct the detailed features of the landslide. When we watch a video taken by a UAV, we may be able to recognize the detailed information of the objects in the video, but further information can be obtained if the images are projected onto a geographic space, i.e., the images are appropriately "mapped". Particularly, mapping of such information enables to find the changes of landscapes or landforms by comparing with existing map data. Here I put 6 GCPs (ground control points), whose geographical coordinates (XYZ) were obtained from an online map GSI Maps to refine georeference results. However some errors (several to tens of meters) may remain in the model - to correct this, it would be necessary to put more accurate coordinates of the GCPs.

Note that the area of coverage of images/videos by a UAV is limited due to some reasons (ability of flight, legal restrictions) compared to a manned aircraft. The UAV-derived model above actually lacks data in surrounding areas of the landslide.

Then the data by manned and unmanned aircrafts are merged to create a more complete model of the landslide and surroundings. A wide area can be covered by the images from high-altitude manned aircraft, while more detailed shape can be obtained by the pictures from low-altitude UAV. The 3D data is shown online as a point cloud. The point cloud was first generated using SfM software PhotoScan (Agisoft), and then it was tiled and optimized to be shown online by using "laspublish" function in LAStools (rapidlasso).

3D point cloud of the landslide obtained by both manned and unmanned aircrafts
http://www.csis.u-tokyo.ac.jp/~hayakawa/pointclouds/160416_aso_bridge_landslide_gsi/sfm_airphotos.html 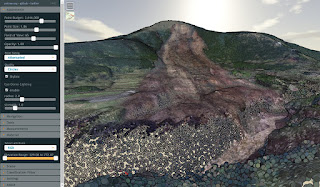 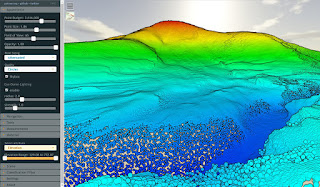 The WebGL system, "potree", also enables to perform some basic measurements of the point cloud, including calculation of distance, angle, area and volume, as well as extraction of swath profiles. Such functions are found in the left-side pane of the browser.


An example of longitudinal profile extraction 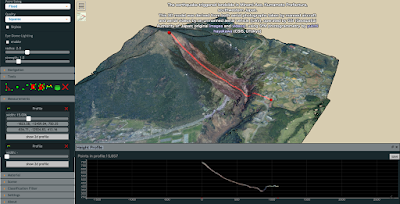 In addition, one can download the original point cloud data in LAZ format. Geographic projection is Japan Plane Rectangle CS II (JGD 2000 Datum). One may use free software such as LAStools (lasview function), CloudCompare and QuickTerrainReader (free version). 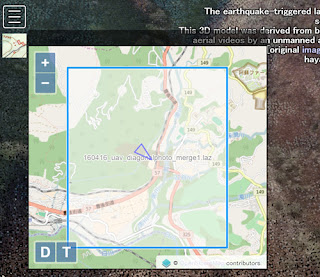 Using such the three-dimensional data, further observation and analyses would become possible to obtain further insights into the landslide phenomena. For instance, one may think about the landslide damming of the river and following outburst flood, which could have caused further erosion and landslides on the valley-side slopes downstream, from differing points of view in the 3D data.